Jill Lauren’s That’s Like Me! is a book about 15 students with disabilities who face challenges in school but express their creativity and talents through hobbies. In the foreword, excerpted here, children’s book illustrator Jerry Pinkney describes growing up with two personas: Jerry the gifted artist and Jerry the struggling reader.

Jill Lauren’s That’s Like Me! is a book about 15 students with disabilities who face challenges in school but express their creativity and talents through hobbies. In the foreword, excerpted here, children’s book illustrator Jerry Pinkney describes growing up with two personas: Jerry the gifted artist and Jerry the struggling reader. 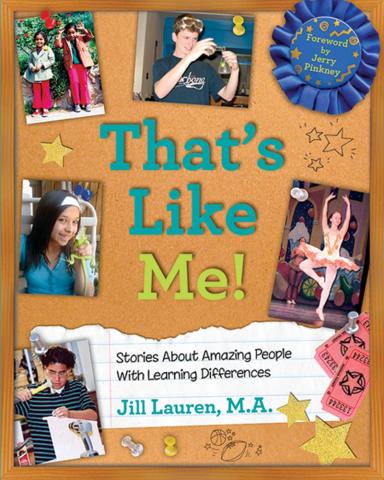 END_OF_DOCUMENT_TOKEN_TO_BE_REPLACED

I grew up as one of six children in a small house in Philadelphia, Pennsylvania. My most prevalent and vivid recollections of my early years are that of a young boy struggling to balance the two seemingly different worlds I resided in during that impressionable time: home and school. I received full support and encouragement from my family, most especially my mother, and I was not laughed at or teased by the people around me. My mother was a quiet woman who spoke mostly with her eyes, and when there were apparent reasons to be concerned about my apprehension at school, she made me feel better about myself. Because of my mother, I was able to enter that second world, school, the place that made me so very anxious and a little off balance with no understanding as to why.

There was little knowledge of dyslexia in the 1940s and certainly not in the schools I attended. In school, I found myself in the favor of my teachers, yet I was often sent to special classes. I don’t think anyone knew what those classes were supposed to accomplish. I have loved to draw as long as I can remember, and I was encouraged by teachers who appreciated and recognized my gift. They were able to see beyond the slow reader I was to someone who wanted to learn and grow.

I was far too young to realize that my two worlds could be bridged. There were two Jerrys: one gifted, smart, and likeable, and the other, a slow reader who was unable to spell. And, oh how much work there was for me just to hold onto ideas as they were presented. I have lived those two lives for most of my life.

Over the years, I have grown to accept that these two seemingly opposing personality traits are really one Jerry. Each supports the other; both come together in a way that I now understand makes me stronger and unique. With uneven grades, but a thirst to learn, I became a model student. Mostly, I tried to show my teachers that this child with so many hurdles in front of him was trying.

My learning disability was not recognized or considered, thereby making it invisible, which caused me to find ways of keeping it unseen. I learned to excel in areas where I was strong and hide those places where there was a challenge. I became very good at hiding it, and I had no way to express just what I was feeling. I supported many assignments with drawing, allowing my gift to shine. I graduated from Hill Elementary School with honors. Making images, making art would become my speaking voice — I drew to learn. I learned to tell my story through pictures, the story of the child I wanted to be.

I hope the profiles in That’s Like Me will serve as a bridge to inspire every child to be all that he or she can be.

A video interview with Jerry Pinkney

In an exclusive video interview with Reading Rockets, Jerry Pinkney talks about growing up as a slow reader and the early encouragement he received as a young artist.

END_OF_DOCUMENT_TOKEN_TO_BE_REPLACED

Excerpted from the forward of That’s Like Me! by Jill Lauren. All rights reserved. Additional excerpts can be found at www.jilllauren.com .

LD OnLine is made possible by a generous grant from