Sentence-Level Concepts and Skills: An Introduction

From Talking to Writing offers welcome help for any educator working with students who struggle with writing and/or expressive language skills. From word choice to sentence structure and composition development, this book provides step-by-step strategies for teaching narrative and expository writing. 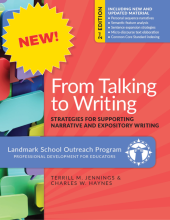 The following content is an excerpt from chapter four of the Landmark Outreach publication, From Talking to Writing: Strategies for Supporting Narrative and Expository Writing by Terrill M. Jennings and Dr. Charles W. Haynes.

Thematic instruction, discussed in chapters 1 and 2, should provide the content and context for sentence teaching. By requiring thematic consistency, learners like Emilio have ample opportunities to rehearse aloud, listen to, read, and write key vocabulary. A common practice in sentence instruction is to simply require students to write patterns using random vocabulary unrelated to a theme. However, struggling writers need multimodal practice forming sentences that use vocabulary that is theme-centered. Using a thematic approach, students exploring the topic of travel via ship in Colonial America, for example, may listen to, recite, read, and write such topical sentences as, “The wind howled,” “A sailor shouted,” and, “Seagulls screeched.” This multimodal approach helps students to internalize specific sentence patterns. In addition, extensive practice using established thematic vocabulary teaches learners how to maintain topical focus.

Language instructors face a challenge in finding a system that helps students to identify and monitor sentence parts without the use of sophisticated grammatical terminology. The conventional language used for teaching sentence parts—for example, noun phrase, predicate, prepositional phrase, adverbial clause, and so on—is unnecessarily complicated for students with language problems. As students progress, simplified terms such as noun, verb, “when phrase,” and “where clause” can act as a conceptual bridge to more formal terms. Very young children and severely language-impaired students may require terms of even greater simplicity for sentence structure. For example, the sentence pattern noun + verb may be replaced by the question prompt, “Who?” followed by, “Did what?” At the simplest level, icons can be used to represent key sentence elements. For example, the concept of noun can be nonverbally represented with pictures of a stick figure (person), house (place), and hamburger (thing). This conceptual knowledge of basic sentence parts allows students to learn simple sentence elaboration skills and helps them self-monitor the sentences they hear, read, speak, and write. As learners advance to compound and complex sentence patterns, teachers can introduce more-formal grammatical terms.

Teachers should introduce sentence patterns gradually, moving from simple to more complex. Small-step, graduated instruction ensures that students experience success with language learning. Learners who have grasped the concepts of article, noun, and verb are ready to progress to the kernel sentence structure, which refers to simple sentences featuring an article (optional), a noun, and a verb. After students can recognize and produce this pattern with ease, they are ready to learn to add spatial prepositional phrases and include an array of adjectives. The addition of “when phrases” allows them to further express their ideas. Table 9 illustrates a sentence hierarchy based in part on the order in which typically developing children learn sentence patterns. Note that in this example, the sentences share the theme of sailing in Colonial America and emphasize the use of past-tense verbs.

This chapter provides theme-centered strategies for teaching these sentence patterns. The section that follows describes steps for developing expansions of the kernel sentence, (article) + noun + verb, the first four patterns identified in table 9. The methods and techniques used for teaching these patterns illustrate more general concepts of systematic and hierarchical instruction that resurface in subsequent sections that involve teaching compound and complex sentence patterns.

Want to learn more about this concept, as well as other useful writing strategies? Order From Talking to Writing: Strategies for Supporting Narrative and Expository Writing from Landmark Outreach.

LD OnLine is made possible by a generous grant from